I couldn’t afford to go to 4Cs this year – or, any year for that matter. I’ve never been. To any conference. Anyway, that’s a conversation for another time. Because I knew about the conference this year, and I wanted to go, and I couldn’t, I stalked the conference on twitter.

I’m not sure what to make of what I found there, so I’ll just share what I observed.

First order of business was to figure out the right hashtag. I was not the only person wondering.

It occurs to me that I don’t know the citation etiquette here. Do I black out people’s names? Get their permission? Everybody who tweeted about Cs is (surely) over 18, so at least there’s that. Will I have to delete this post later to be safe?

None of the hashtags proposed here were quite right. (You can learn quite a bit about diamonds following #4Cs.) A quick visit to the Cs site solved the problem:

So I loaded it up in TweetDeck, and cruised the #4C13 column whenever I had 30 minutes or 4 hours to spare. 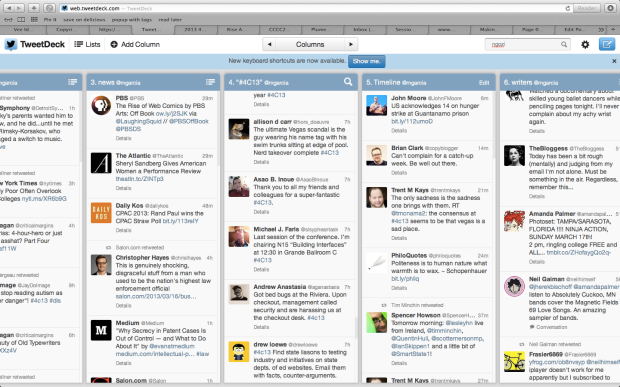 I am interested in language learning, digital/online reading and writing, coding, and social justice, so I naturally paid closer attention to tweets around those topics,

Perhaps people who were predisposed to tweet were likely to attend sessions about digital composing.

Obviously, this method of eavesdropping only afforded me a tiny slice of the convention, and didn’t stretch to cover even the digital sessions that it might have been expected to.

Some tweets were cryptic:

Some were logistical – targeted at people who were there and (often)tagged with room numbers:

There was some meta-commentary on presentation: 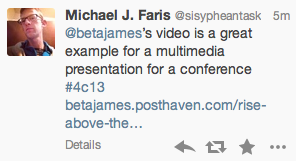 And Henry Giroux’s address got people fired up. It was a highly tweeted event.

Tweets with twitter handles and presenter names were helpful when I wanted to search the web for more info. I often followed people whose presentations looked interesting and visited their websites (if they had them) for more of their research.

Tweets with links to webpages, presentation slides and videos were few and far between, but much appreciated. They gave me an opportunity to think and say something in a way that tweeted observations and quotes did not.

If twitter is a Burkean parlor, then linking to source material is a serious hand up in helping someone on the outside “join the conversation.” Because of people’s tweeted links, I watched @annetv’s video on the movement for coding literacy, I went through @trentmkays’s prezi on using twitter in his FYC course, and watched @betajames’s remotely presented video (with transcript) about learning management systems (LMS). Several presenters tweeted links to their handouts or transcripts of their talks, and the Cs site had a place where presenters could upload materials, though it didn’t seem much utilized. The “Creative Writing” folder had no uploads and the “Teaching Writing and Rhetoric” had 18, with most of the others having 3 or 4. The links go back to the landing page for the session, and occasionally there are no materials there.

And though I don’t think I really got a feel for the conference experience, I concur with @ahhitt. I was happy to “attend” and attend to what I could find and sad to miss presentations by so many great people.

Of course, people who were there in person had similar difficulties:

I’m thinking about how we tweet to “converse” with people who are experiencing (or at least are familiar with) what we are tweeting about and how we craft tweets to try to include people who are not. I’m also interested in the tension between the idea that “all the little sips” add up to a “big gulp of conversation” and the worry that Sherry Turkle expressed in her TED talk – that they might leave us “connected, but alone.”

12 thoughts on “Confessions of a Conference Lurker”

If you have difficulty accessing any portion of this site, or if you need content in an alternative format, please contact me at mgarcia [at] uwlax [dot] edu.